Blog » A Family, Their Dog, and His Favorite Screen Door

A Family, Their Dog, and His Favorite Screen Door

Baxter’s Door Grew With the Family

David and Anita got older and Baxter got bigger. After a day spent playing out in the sprinkler, sopping wet Baxter didn’t disturb his doggy door as he came in. It swung easily as it always had. The carpet and couch, on the other hand, had a more difficult time.

Family meals out on the back porch were great opportunities for Baxter to play in the backyard. He could head into the house whenever he wanted to get a drink or chow down on his own food, and then vault back through his doggy door to pounce on the kids as their meal wound down.

As Baxter got bigger, the screen door kept up its end of the bargain. 65 pounds of excited labrador retriever bounding through the opening to go on adventures with Anita and David were shrugged off by the door with ease. The door flap opened flawlessly every time. Even as it, Baxter, and the kids got older it never slowed down. And neither did Baxter.

The years came and went in the same way Baxter did — in and out of his door, leaping from one happy moment to another. Birthday parties in the back yard. Family movies projected on the side of the house. Friends coming over to visit with David and Anita, always raining affection down on Baxter. It was a good life, and Baxter relished every moment of it.

Baxter was up in years. He didn’t move quite a fast as he used to, but his dog door still got a lot of use. David was off at college and Anita spent more time with her boyfriend than her best friend. Baxter’s world had shrunk somewhat be he still enjoyed heading out into the yard when the notion struck him. Mike and Shelly were happy to let him.

Then one day. Mike remembered it as a Thursday because he was working from home as he does on Thursdays. Baxter headed through his doggy door to chase a squirrel. And then he was gone.

Much to the family’s dismay, it turned out that Anita had left the gate open on her way to a friend’s house. Baxter’s pursuit of the squirrel took him out of the yard and out into the unknown.

Anita was understandably heartbroken, her sobs from inside the house punctuated by Mike and Shelly’s calls out across the neighborhood for Baxter to come home. They left their trusted screen door exposed at night in case Baxter returned, but his doggy door remained unused.

Not ones to lose hope the family posted missing signs on polls and trees around their neighborhood. The family enlisted the help of friends to get the word out about Baxter’s disappearance. They called local animal shelters, veterinarians, and every other place they could think of to see if their beloved pet had turned up. Everyone came up empty.

Two weeks passed. Anita could often be found staring out the screen door. She would imagine Baxter as a puppy again. Climbing the nearly indestructible screening with his tiny claws, or bounding through the doggy door to cover her face with kisses.

Mike and Shelly were despondent, too. The family would sit down to eat in the dining room and no matter what they were talking about, their conversation would inevitably return to their dog.

And then it happened. They were finishing dinner one evening. David was clearing the dishes away while Shelly and Anita chatted absent-mindedly when they heard the familiar “flap flap flap” of the doggy door. Anita bolted from her chair and launched herself toward the living room with Shelly and David close behind.

There, tired and hungry, with dirt matting his fur, was Baxter, trotting happily toward them. Anita let a shout of joy that Shelly recognized from that day. All those years ago, when their dog first came through his doggy door and entered her daughter’s life. He was back. A bit worse for wear, but back safe and sound all the same. That flap of his trusted doggy door had heralded his return.

See? A screen door can be a hero. The doors manufactured by Best Custom Screens & Blinds certainly are. They’re built to last and can take anything the world throws at them, including 65 pounds of pure canine joy. The Williams family loves their sliding screen door with an integrated doggy door, and so will you, whatever your Baxter is named.

Just make sure to keep your gate closed. 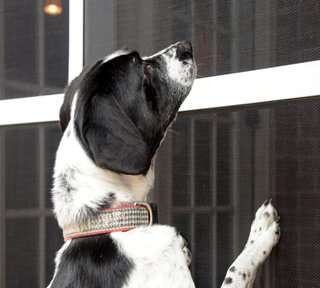 What are pet friendly screens?

Pet friendly screens are window and door screens that are best for dogs and cats.

What is Pet Screen?

Pet Screen is a screening material that is dog and cat resistant and guaranteed not to tear or rip. Your large Labrador or extra large Saint Bernard can scratch away at the Pet Screen and it will not damage it.

It’s manufactured by Phifer Incorporate. A proven brand that works and lasts.

Pet Screen is designed to be puncture resistant especially resisting damage by dogs and cats. Also recommended to be used in high traffic areas like sliding screen doors and french door screens.

Pet Screen is extremely durable making it an excellent choice to be used in patio enclosures as well as windows and doors. Plus it provides clear outward visibility. This is one screening mesh that cannot be beat for its durability. It’s well worth it!

How to keep your pets safe