Blog » Did you Know that windows screens save Lives?

Did you Know that windows screens save Lives?

The history of mosquito control and window screens

Window screens help reduce mosquito malaria.  Recently I have become very concerned with home owners and renters!  They have made a senseless decision to remove their window screens from their homes or apartment building windows. Just to save a couple of bucks!  Don’t they know that window screens save lives?

You may ask: why am I so concerned with this?  Let me state that window screens will facilitate in saving many lives!  Window screens serve as a crucial function!  Let me share a couple of things that I actually discovered in my analysis.  It all has to do with flying insects (primarily mosquitoes) and the diseases they carry. For example diseases like the Zika Virus, Malaria, & West Nile Virus.

I am going to provide a short history lesson.

Mosquitoes have been around since the start of life on earth.  They have been alive since the Triassic period 400,000,000 years ago.  Best-known to be disease carrying insects.  Originated in Africa, Malaria is one among many ancient, deadly diseases.  It was acknowledged in writing by the Chinese around 2700 BC, and by the Sumerians in 1700 BC.  Malaria is translated as “bad air” in Italian.  The Romans believed it was caused by the foul smelling marshes around Rome.  Marshes were drained to eliminate smell and also sickness.  Therefore, they never recognized that it was the breeding ground for the dipterous mosquitoes carrying malaria.

In America up till 1845, Florida was inhospitable to live in because of mosquitoes.  Henry Flagler engineered the railroad so that the wealthy will begin building vacation homes in the state.  The developers would drain the neighboring marshes to eradicate the pests. They would use fans and bed netting to shield themselves from the nighttime insects.

Around the 1820s – 1830s people used cheesecloth for their windows, although wire window screens were being advertised they weren’t in demand until years later. Window screens were first created in the middle 1800’s. Although it’s not clear what company or individual started making screens first.

There are several references of woven wire for window screens and advertisements which appeared in 1823 to 1836. One reference is from the 1860’s where the company Gilbert and Bennett had manufactured wire mesh sieves for food processing. An employee decided to paint some of the wire cloth and sell it as window screens. Another reference is from the late 1860s to early 1870s when E.T Barnum Company advertised screens to be sold by the square foot.

Mosquitoes in the 1800’s & how window screens saves lives!

By the start of the Civil War from 1861 to 1865 window screens became known as a household necessity.  These insect preventing window screens save lives weren’t proprietary within the U.S. for quite a while until the year 1900 once several design patents were awarded for the unique specifications and innovations.

Malaria was once a major problem within the U.S. and because of it, the National mosquito Extermination Society was founded in 1903 and later turning into the American Mosquito Control Association also known as the AMCA in 1948. Throughout this era of time the AMCA lead the country with mosquito control by the of insecticides, window screening, air conditioning, and preventive education which have proved to basically eliminate the disease Malaria.

Just because we’ve had good success in the U.S., doesn’t mean that the problem doesn’t exist elsewhere.  The American Mosquito Control Association states on their web site that “Mosquitoes cause more human suffering than any other organism.  Over one million people worldwide die from mosquito-borne diseases every year.” in addition to this number, mosquitoes transmit further diseases to dogs, horses, and birds.  All of the diseases include;

People nowadays, in history, around the world, and throughout different decades/ times can all agree why bugs and pests are an annoyance. Annoyance for these pesky disease carriers has been expressed even in art forms. The importance of artwork is that it usually depicts a historical moment in time.

One example of artwork is a song composed in 1882 and titled “ Oh! That horrid Mosquito”. One lyric from the song is “You may scratch till broad daylight, But you can’t catch that mosquito. But he keeps singing all the while, Oh, that horrid mosquito!” Another example of artwork was done in the 1900s, it is a poem titled “The House Flies”. This is the poem below.

I initially learned of this by hearing former President of the United States, Jimmy Carter speaking regarding this subject at my daughter’s school many years ago.  He and his spouse Former first lady Rosa Lynn Carter had developed a relationship with the school and we were very lucky to have had them visit two times.  I additionally learned about all the great works they have done, organizations they have developed and still pursue together with Habitat for Humanity and the Carter Center. 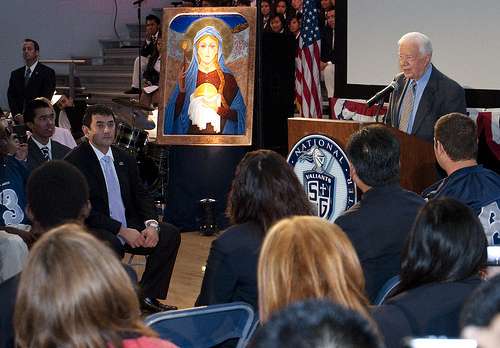 According to the Carter Center, in 2008 there have been roughly three hundred and fifty to five hundred million cases of malaria reported  worldwide and a million individuals were killed annually, most of them being kids.  Over six year of providing medical treatment for the disease and the distribution of over seven point six million insecticide treated bed nets since 2004.  Malaria presently kills an estimated six hundred fifty five thousand people every year, mostly children, with about two hundred and fifty million cases of the disease reported worldwide. Roughly 80 % of all cases and 90 % of all Malaria deaths occur in Africa, where one child in ten dies before the age of five from the illness.

Another disease, lymphatic Filariasis is noted as a leading cause of permanent and long term disability worldwide. Roughly a hundred and twenty million folks are infected and one point one billion are in danger of infection.  Its cause are thin worms transmitted to humans by mosquito bites in tropical and sub-tropic regions.  The worms cause blockage in the lymphatic system causing fluid collection in tissues of the legs or genitals, severe swelling, and fever from bacterial infections. Long term infection is an unalterable condition referred to as elephantiasis.

Thank goodness for the Carter’s efforts in eradicating these diseases worldwide.  Please keep in mind that the employment of insecticides and screening / screens are the winning effort pursued by the Carter Center.  Let’s not forget that thanks to the efforts of the many individuals, we currently have window screens and air conditioning in our homes that keep mosquitoes out.  Please don’t remove your screens.  If there’s a hole in one of them; go right down to your local hardware store to repair it or get a do it yourself kit.  You’ll be able to additionally call a handyman or an organization like Best Custom Screens to re-screen it.  If the screen is bent beyond repair then let’s order you a replacement screen. They’re more cost-effective then many folks think.

It’s our goal to supply homeowners and building owners with window screens. Plus screen doors that may keep the interior of the buildings free of mosquitoes and unwanted flying insects. Essentially as proven in this article, providing a much better quality of life.