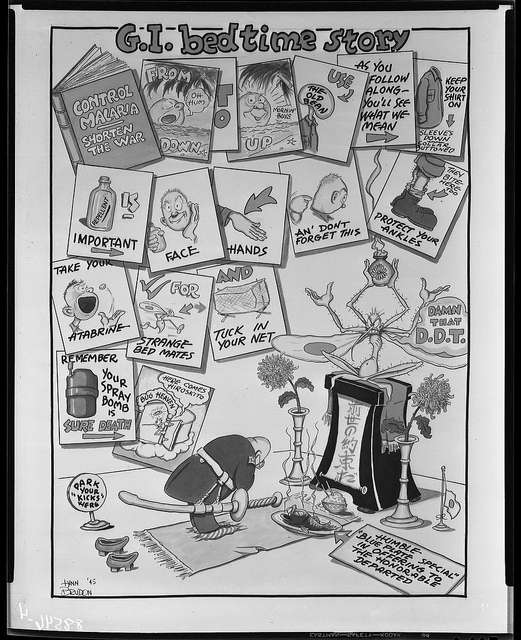 War against malaria – During World War II the United States Army faced difficult malaria control problems in America and in the battlefield. The malaria mosquito was more deadly than the enemy of the darn war.

In order to prevent malaria and shorten the war, American G.I.’s had to keep fit and take Atabrine daily. The term G.I. referred to Government Issue or General Issue which involves the government drafting men in the 40’s and was widespread throughout the United States.

G.I’s had to follow steps to preventing and controlling malaria. Such as sleeping under a net, keeping it prepared, tucking it in and making sure there is no mosquito waiting for you inside the net. G.I’s also followed steps such as the G.I. bedtime story.  The step involved was keeping their shirts on and applying the repellent everywhere.

Comments regarding our blog post from: https://pacificparatrooper.wordpress.com/2016/05/04/war-against-malaria/ .  Back in the early 80s, my boss regularly laid low with recurring bouts of malaria.  He first acquired them in PNG in WWII. Somehow, I don’t think tucking in mosquito nets was high on the list of possibilities.  Also, while they were stuck out exposed in the mud and jungle of the Kokoda Trail.  In addition, I do remember him saying quinine for treatment was in short supply. But they are certainly innovative posters.

This post was originally shared on our other blog at https://bestcustomscreensblog.wordpress.com/tag/malaria/

On the previous post on wordpress, we received some great feedback on the photos.  Apparently the photos below are hard to find as well as unique.  It’s really interesting to us that the photos helped soldiers learn about the disease carrying mosquitoes while in jungles, forest, and all other areas in other countries.  Especially along the Pacific Coast of Asia and throughout the rest of the world. 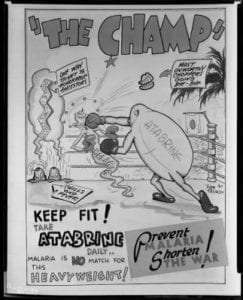 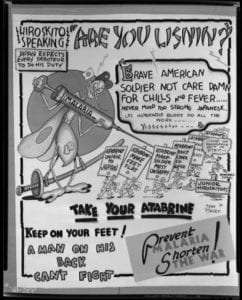